The few mission feature looks very promising.
The blog post gives some info, but it would be great to get more detail - and I’ll throw a few suggestions for potential improvements in.

The possibility hinted in the blog, “community to “turn on” mission cells. Possibly via an API or integrating with existing OSM task tools” seems extremely intriguing. I’ve wanted something like that for quite some time from JOSM - exposing that via the API sounds wonderful. Such requests might have to be constrained to smaller areas though, and perhaps even to specific spots and directions (to see some street signs).

Images are not counted if you do not enter Mission capture mode. If you select one Mission and capture, then move to another mission, you are still in Mission mode so all capture will be counted. But not from regular capture mode.

Damn - this rules out all the folks that capture using multiple action cameras. If we add images in mission areas will the missions be removed?

Correction: the app will not show these as completed (working on how we might be able to do this). However, I am also working on how to display a leaderboard, and the leaderboard would indeed count the images captured in a mission as counting toward completing that mission.

would be nice, if content could be uploaded over the Webuploader as well to the mission.
Currently you can do it only over the mobile device and we are not able to upload any content we capture with a other device

Thank you for all the detail, this was really helpful.
Although this does rule out most of my contributions from participating in missions.

Majority of my images come from an action camera.
Next up is a phone… but without a network connectivity, so I cannot even open those missions.
Last in the list is a phone with connectivity. But even then I usually take some quick snapshots without explicitly viewing the missions.

If a weekly batch of action camera images is a few dozen thousands of images (in summer), a thousand at most from the network-less phone, and maybe a few dozen from the connected phone.

For missions to “work” they might need to take into account all contributions, from all devices.
And for people unaware of missions, getting some notifications about completing them could be captivating

My suggestions here still stand - especially the first one.
Currently the mission view is completely disconnected. For example, the default map completely lacks highway=residential. I can switch to OSM in the explore mode, but not in the mission mode, where there are seemingly lots of dead ends and empty space with some buildings.
Having a single view with toggles, as suggested, would be much easier to use.

Here’s a different minor issue - this mission is not named by a road, but by a powerline, although there are enough roads in the tile. The cell ID cannot be copied, thus cannot provide it as text 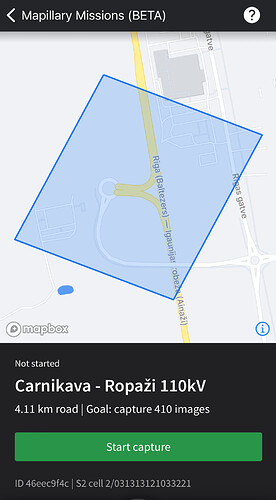