So, Kandao are supposed to start shipping those out soon
https://www.kandaovr.com/qoocam-8k/

The not so good:

Where did you read that?

I joined a Facebook group and asked about the image interval capabilities. I haven’t got a good answer (yet).

https://www.kandaovr.com/qoocam-8k/tech-spec/ says “Time lapse photo” under photo mode, so I assume it does sequence shooting. The big question is how fast, for both jpg and 16 bit DNG.

They tout GSV capability, and my understanding is that requires some sort of OSC

@tryl yeah, I was wondering whether time lapse photo might be fast enough

I think “Time lapse photo” is a moot point.

According to the technical specs the photo resolution is 7680x3840 (29Mpx), the same as the videos. So one could just shoot an 8K video and extract photos at whichever interval makes sense (heck ideally one would calculate the speed and extract one photo every 5 meters!).

It also means that if the camera has a lower framerate video shooting mode (e.g. 2 or 10 fps) it can be used to save on battery usage and storage (though I think the first thing to do is to max out the external battery and MicroSD card anyway).

my preference for capturing photo over video, even if supposedly the same resolution, is due to multiple things:

Photo over video (compression artifacts)
BUT, as @4004 mentioned in one of hit points the quality of the extracted images is noticeably less then form a single taken image. My YI360 is a 5.7k camera. When I take an image the file size is something like 9Mb. When I extract an image from a video file it is around 3Mb. The video and image both at maximum quality settings. The difference in file size is huge and yes when zooming in you see that although both images have the same amount of pixels, the quality is noticeably less good.

I do think the quality of image grabbing will be better from the QooCam. One reason is obvious, 8k is quite a bit more then 5.7k. BUT also I can set my YI360 to a maximum video bitrate of 120 Mbps. I have read that the QooCam can be set to 200Mbps, therefore chances are that the quality difference between an image and a ‘video grab’ will be at a more acceptable level.

Power consumption
Assuming that cameras most likely are comparable to certain degree I do not think the power consumption will differ a lot. In video mode, when I set the camera to one or two image every seconds or in full video mode, the battery life time remains more or less equal. I am not (yet) able to get the YI360 in an image-interval-mode… but I expect the battery will be about the same.

Processing & no raw/dng
For mapillary I’dd advise to use automation when you want to go into the serious numbers of images. Grabbing images from a video file is quite doable in automation, so in my opinion not much of a hindrance. That is also why raw/dng in video won’t be missed I think. In that format you can fine tune an image. Great when you want the perfect result for every single image, but as good as impossible to automate…

available space
Well, when you’re serious in making a lot of images those las few bucks spending on a large SD card won’t stop you I think, the gain in (potential) quality and ease of use will win every time.
I bought a (fast!) 128Gb card… but even on a whole day of taking images I barely needed half… so I’dd advise to buy the fastest 64Gb card you can find

memory bandwidth
As written above, get the fastest one you can get! I am quite curious how much better image grabs are at 200Mbps (as to my max of 120Mbps, it is 2/3 more data!) And I’m quite curious as to how fast the QooCam can take images… chances are that (when the software supports it…) you can take images fast enough when walking and hopefully when cycling. When you attach it on the roof of your car you’ll need to revert to the video grabbing I think. In the end (assuming the camera can be reconfigured to the extreme) it will become a trade-off between image frequency and quality.

Personally I wouldn’t mind if my/the camera would have the option to increase the Mbps to say 400 or even 800 Mbps resulting in say a maximum image rate of once per second to once per two seconds (ideally, let me dream for a sec

). I’dd have a sequence in one file and have the quality of image.

Interval setting is at 2 seconds, this camera looks really prommesing! 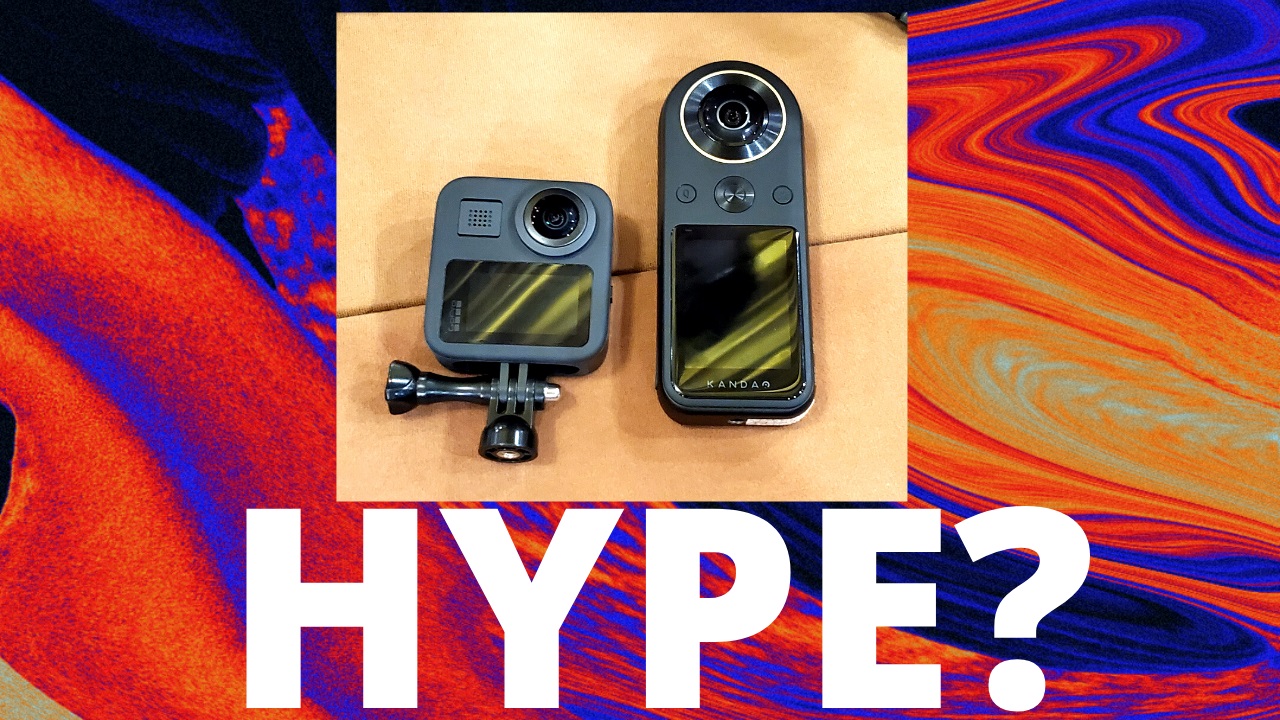 Kandao Qoocam 8K is the first 8K 360 camera for consumers.  At just $589, it is the most affordable 8K 360 camera on the market.  Moreover, Kandao’s CEO stated to me that it has the same detail and video quality as the highly regarded...

I read that there will come a Qoocam 8k PRO, which will have GPS.
AT 360 rumors the Qoocam can use the GPS from a smartphone

PS: I have no experience with DNG, anyone here does?

I posted this in the Facebook group mentioned earlier where the manufacturer KanDao also is active:

photo interval !
I know the camera just came out, but one can dream…
Why?
Hi, I’m working on a project in my village creating an archival platform also containing Mapillary (like G-maps. but with much, much more options for developers!). I do this in my “spare time”… I’ve been at it for over two years now!
Other cam’s I’ve tested:
I first bought an old LG360 for testing, later I thought to have found the perfect solution; a YI360. The hardware is great, the software(support) horrible. Thanks to the Mapillary community I came across the QooCam 8k.
The resolution is great, the fastest image interval of two seconds is a bit average though

.
Could it be possible to create a 1 sec image interval?
Maybe at that speed lose in camera stitching and/or DNG?
That would make this camera “the killer cam for Mapillary!”
Or option: video: 400Mbps or 800Mbps at 1 frame/sec?
This camera already can do 200Mbps, which also might be promising (grabbing the images form the video) My YI360 can do 120Mbps. But there the image quality is substantially less than a seperate image. Increasing the Mbps would have similar results for my goal, which ever is easier to implement

A user on the OSM RU telegram group managed to get it to shoot at 1s intervals, and transfer images at the same time, via a script. Unclear what the endurance is

Nice! You have a link/ more info?

Try searching SviMik on https://t.me/ruosm. There were no download links, just PoC images and messages in Russian, so not sure how useful it is

Maybe at that speed lose in camera stitching

It cannot loose stitching because it never had it.

Maybe, haven’t tried. DNG at 1s interval sounds a bit insane to me. What are you planning to do with DNGs at that quantity? I thought DNGs are edited individually, and whenever you decide to just convert them into jpeg in some automated mode then why don’t just capture jpegs in the first place if you don’t really edit them anyway?

I’m not sure if it’s right to publish a reverse engineered data. I’ll give you some hints. This program worked for me (installing cert is not required, the qoocam app does not use encryption anyway):

Packet capture/Network traffic sniffer app with SSL decryption. Not that feature rich yet, but it's a powerful debugging tool especially when developing an app. If you can't capture your app's SSL packets Do one of the followings: - Set targetSDKversion to 23 or lower - Setup security config described as 'The default configuration for apps targeting Android 6.0 (API level 23) and lower' at https://developer.android.com/training/articles/security-config.html#base-config Features - Capture ...

Then try to do things with the app (shooting, downloading) and you’ll see all the requests you need. The protocol is asynchronous, meaning you can send shooting requests while transferring data at the same time.

The downloading speed over WiFi is 11 MB/s, no matter if the camera is shooting or not. It is capped by the WiFi chip in the camera which highest rate is 150 Mbit.

USB is faster, but I couldn’t figure out how to use it on Windows or Linux in any mode other than mass storage. The ‘Android’ USB mode which allows controlling the camera simply has no drivers for PC.

PS. Their software (the firmware itself, Android app and PC software) is crap, really.
For example, after upgrading to firmware 72 or 75 the camera may stop recording videos after ~20 seconds. What is even more funny - the LED will be still blinking, and the screen will be still showing the recording red dot and the timer. The only thing that gives it away - the remaining capacity in NOT decreasing, see this video: https://youtu.be/j4Edzfoqo2g
I stopped the recording, connected it to my PC and indeed found only one file 22 seconds length, it just stopped writing abruptly. And it’s internal memory, not even a memory card!
The only workaround is to downgrade the firmware to V62.

Also, you may need to fix the framerate after stitching, it may change it from 30.000000 before stitching to 30.008333 after stitching (restore 30 with ffmpeg or something to get the audio and video back in sync). The problem is confirmed in QoocamStudio-v1.5.1.5, they’re still working on that.

The only things I enjoy are the audio input and the API that I can use to write my own software, otherwise I would have already returned it and bought GoPro Max, which has about the same image quality (if you stop counting the pixels and look into how much details the picture actually has).

PS. Funny thing: the lenses give sharper image on the peripheral and somewhat blurry in the center. Anyone can confirm that or is it just me?

The smallest interval is 2 seconds and this for both jpg and dng capture.

Maybe, haven’t tried. DNG at 1s interval sounds a bit insane to me. What are you planning to do with DNGs at that quantity? I thought DNGs are edited individually, and whenever you decide to just convert them into jpeg in some automated mode then why don’t just capture jpegs in the first place if you don’t really edit them anyway?

When I capture on an e-bike at e.g. 30 km/h 1 image/sec is perfectly good. The same if the camera is mounted on a car.

If you have DNG and the images becomes somewhat too bright or dark you can fix much more than you can fix in jpg. For a large quantity images it requires a lot of storage in camera and a lot of work and processing to do this, so it is definately a choise that is not obvious.